Commitment helps in the achievement 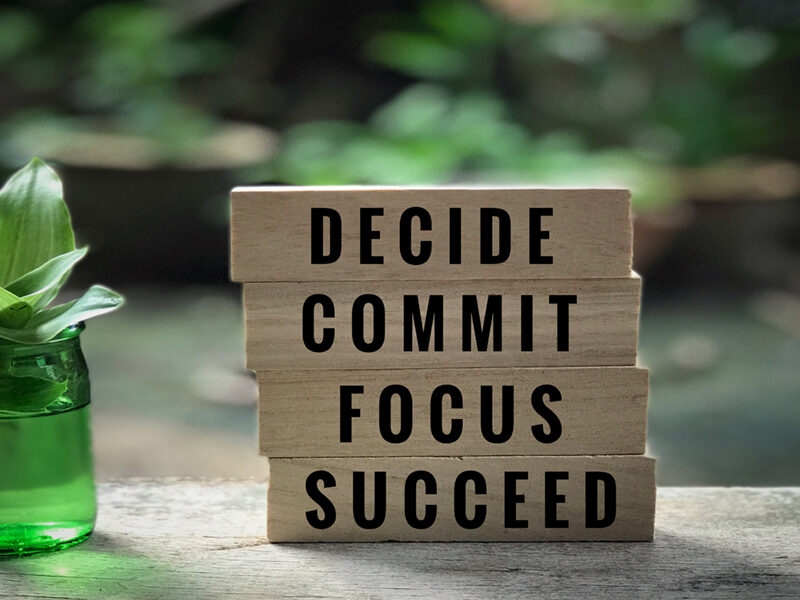 Commitment is a firmness of one’s mind that engaged oneself in a particular task. It is a combination of desired aim and a set of actions. An individual attains the determined goal. A committed person gives a lot of time and attention to one’s fixed target. He believes that it is right and more important than other ideal activities. Commitment leads an individual to make a difference among common people. His actions take a form of an urgent piece of work in his life. It helps to develop iron determination for achievement. It brings a reward for him.

A determined person never makes any compromise with hurdles that occurs in the way of his success. His healthy thinking and actions solve all troubles. He gets a pledge to complete his agreement. As he makes with himself, with a person, with a community, and an organization or a country. The area of his resolution may be for self-progress or for the nation or worldwide. He fixes a deadline to complete it. He takes responsibility to discharge his duties honestly. The commitment occurs in various forms as-

Commitment as a Challenge

Commitment as a challenge

There was a great teacher, philosopher, jurist, and economist in ancient India. He wrote the book Arthashastra. His name was Chanakya. He was also known by other names Kautilya or Vishnugupta. He was the founder of the Maurya Dynasty. He was born in 375 BCE in Takshashila. [ according to Jain legends]  He was born in a Hindu family. He followed the rules of his community strictly. As a teacher, he taught at the world-famous university Takshashila. It was a famous university at that time. He was a genius and foresighted person in the country. His views are well-known in today’s India. It has been followed in various types of societies and organizations.

An Oath to Took Revenge

Once, he had been invited to Pataliputra, in Magada [now Patna in Bihar a state of India] King Nanda’s royal court to discuss important political matters. As he was a wise Brahman. All the invited persons were sitting in the court and waiting for the king. King Nanda was not only a powerful king of India but also a pleasure lover king. When he entered his court, he stared at Chanakya. Then he got angry due to his physically ugly look. He cried over his soldiers to push him out of his court. Then Chanakya challenged king Nanda – one day he would destroy his kingdom. The challenge took the form of commitment. Then he started his movement against the king to take revenge for his insult. His efforts couldn’t come to an end till to abolish his sovereign state.

Selection of a Boy

First, he started to collect money because he knew, no task could be completed without money. He also chose a talented, teen boy among a group of boys who were slaves. He paid the price of the slave boy to his owner and brought him. He started the training of the boy in Takshashila. The boy’s name was Chandra Gupta. Teacher Chanakya kicked off his journey to prepare another king who would defeat the powerful and merciless king Nanda. The boy Chandra Gupta was devoted to his teacher. He learned numerous tricks under the supervision of his dedicated teacher. The defeat of Alexander

He thought, Chandra Gupta, became an efficient warrior. He taught him many useful lessons. He led his talented student to join Alexander’s army. Alexander was an Egyptian ruler who wanted to conquer India. Joining the army of Alexander for Chandra Gupta was a remarkable decision of Chanakya. He thought- he should learn new and advanced tricks of the war. As he was an intelligent and brave boy – he learned a number of tricks and became an efficient warrior. In the region of India near the river Beas, the army of Alexander got sick to return to Egypt and Alanxendar also got ill. The Egyptian king expressed his will to return to his home. At last, he returned. On the contrary, Chandra Gupta had learned a number of methods for fighting – to defeat his enemy during the job of the Egyptian army.

The victory of Chanakya

It was the time when Chanakya decided – the recruitment of soldiers to make a strong army for Chandra Gupta. He did it with the help of his trustworthy friends. Because victory over Magadha was his iron determination. He used all the techniques that he knew. Finally, the day came when he defeated, king Nanda. He reminded him about the incident that happened in his royal court and his challenge. Then Chandra Gupta murdered him and captured the thrown. Thus a respected teacher Chanyaka became the founder of Mauryan Density. He worked as a political, and royal advisor for Mauryan Density till his death. His views are followed in different organizations such as Chanakya Niti in today’s India.

Commitment teaches a variety of dealing with social, political, commercial, cultural, and religious norms. In which field do, individual works dedicatedly? At the primary stage, it removes selfishness and purifies the mind of a committed person who takes a decision to make a change. Even creating something different for the welfare of living beings is a cumbersome task. . But not impossible. There are many rulers from centuries in the world’s history who murdered innocent people mercilessly for the sake of their rule. Mussolini was the emperor of Italy. He signed an aligned with Germany. When the 2nd world war broke out in Europe [1939] and Hitler was in power in Germany.

Both emperors followed the ideology to abolish the minority groups like – Jews, Gypsies, and Blacks. As they called it unwanted for the nation. Mussolini ordered his police force to kill them without any warning. Miserable, helpless people were seeking help. But nobody wanted to keep them safe in their houses due to their own life was at the risk. At that time Hugh O’Flaherty came for the help of defenseless people who were crying for mercy. He was a priest, born on 28 February 1898 in Lisrobin, Ireland. His father was a cabin attendant in a golf club. He was the eldest son of his parents. At an early age, he showed his interest in the priesthood. He joined Waterford College for higher education. His likeness with priesthood became a part of his education. He applied to Mungret College in Limerick. He was accepted as a seminarian. He was posted as a young seminarian in 1922 in Rome. He studied theology in Rome and earned a degree. He got doctorates in divinity, canon law, and philosophy. His job in the priesthood gave him many chances to move to Europe. He posted in Egypt, San Domingo, Haiti, Czechoslovakia, and Palestine. The features of a skilled diplomat helped him to develop connections with high-profile persons. He liked to play golf. His golfing skill was admirable. He played with the ex-king of Spain, Count Ciana  Mussolini’s son-in-law.

He was a top-ranked person in his vocational field. He earned it in twenty years of his professional life. When the war broke out in Europe. Germany and Italy were aligned to follow the policy of discrimination against minority groups of people. In 1942 these countries started to propagate fascism. Injustice was the rule of these two countries. But O’Flaherty was not in the favour of the practice of fascism. He took an oath to help those helpless people. He initiated the protection of victims of discrimination. He did what he could do for their safety. He used a hideous residence. He used his old college, monasteries, and convents. He had also used the houses of his old friends also.

The honor of His Life

It was a great risk for his life as well as his supporters who were helping him. He saved more than 6500 Jews, Americans, and British soldiers. He got a Nickname ‘the Scarlet Pimpernel of Vatican’. When the war was over, he continued to serve in Rome. He received The US Medal of Freedom and the title Commander of the British Empire. In 1960 he got retirement and came back to his home town Cahirsheveen, in Ireland. He spent his later life here and died on 30th October 1963. The page of famous newspapers around the world carried a front page of his contribution in his honor. His commitment to saving the life of dependent people. He helped him to stand against injustice.